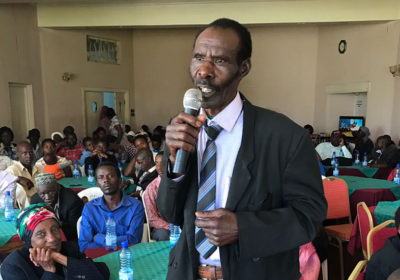 Ancestors of an estimated 500 Rwandans were moved from Rwanda to Kenya by the British colonial administration in 1940s to work mostly in tea plantations in Kericho county and other parts of Kenya.

This also applied to other foreign nationalities that came under the same arrangement. Efforts to regain their citizen status has since then proved futile.

Some of the Rwandans and their descendants on Sunday turned up at the Rwandan High Commission in Nairobi to find a way out of their limbo. They met the High Commissioner to Kenya, James Kimonyo, according to a statement from the Mission.

‘Statessness’
During the interactive session, the majority of the questions asked by community members revolved around the issue of statelessness, which has denied them the fundamental rights enjoyed by the rest of Kenyans.

“The High Commissioner was informed that in 1980s, Kenyan government of the day, decided to send them back to Rwanda but the Government of Rwanda at the time refused to accept them saying that they were Kenyans,” reads part of the statement.

Some members of the community had to live under forged identities for them to be able to get employment or send their children to school. They narrated how hard it is for them to do any long-term investment, including acquiring land or property.

Gabriel Ndagijimana, who was born in Kericho in 1940 before Kenya gained its independence, said he is neither a Kenyan citizen nor Rwandan.

“At 77, I have never opened a bank account; I have never voted, never bought property and I’m tired of this situation and worried about my children,” Ndagijimana said.

According to John Nyirindekwe who was born in Kericho to two Rwandan parents in 1940, children born to members of his community cannot access public schools because they are considered foreigners.

“We have seen children of our neighbours enjoying government scholarships to pursue their education dreams while our children cannot because of our stateless status.”

Members of the community acknowledged Pan-Africanism gesture showed by President Uhuru Kenyatta when he granted Kenyan citizenship to Makonde community who have lived under the same situation for decades.

They asked the High Commissioner to engage the President and his Government to help address the issue.

In response, Kimonyo said that based on the existing friendly and strong friendship between Rwanda and Kenya and in the spirit of the East African Community integration, he believes Kenyan Government will find a lasting solution to the matter.

“I will engage the relevant Government institutions in order to resolve this matter as soon as possible,” Amb. Kimonyo said.

How Morocco charmed its way back to AU

How Nigeria is losing on Global relevance