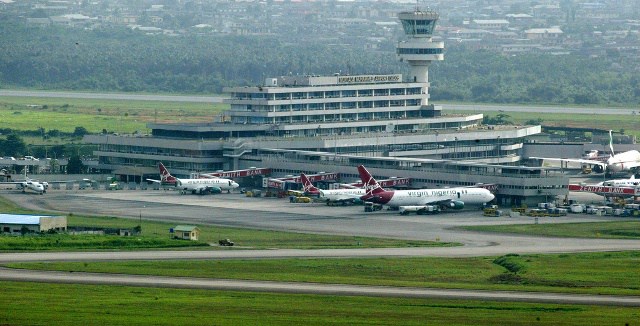 A report by the National Bureau of Statistics (NBS) has revealed that aircraft movement in Nigeria declined by 5.9 percent in the first half of 2018 when compared to the same period in 2017.

The statistics released by the bureau further revealed that unlike in the past when the Murtala Muhammed Airport (MMA), Lagos, dominated aircraft movement, Nnamdi Azikiwe International Airport (NAIA), Abuja, slightly overtook Lagos in the first two quarters of 2018.

The report released by the bureau indicated that aircraft movement recorded in quarter one of 2018 was 49,497, which declined by 13.89 percent on a quarter-on-quarter basis and by 1.48 percent on a year-on-year basis.

According to NBS, among the 49,497 aircraft movement in quarter one, 83.31 percent flew on domestic routes while 16.69 percent of the total were on the international routes.

It added: “Notably, aircraft movement continued to decline in the second quarter even as the number of air passengers grew within the period when compared to the same period last year (Q2 2017), indicating sustained improvements in efficiency through the first half of 2018.”

However, Abuja Airport received more aircraft movement in the first half of 2018 when compared with that of Lagos.

According to the bureau, Abuja Airport in the first half of 2018 had 32,011), slightly higher than the Lagos Airport, which recorded 31,037 within the same period.

Abuja Airport also maintained the marginal dominance over Lagos Airport in the second quarter of 2018 with 15,609 compared with 15,171 of Lagos.

However, despite the sharp drop in aircraft movement in Lagos, the airport still recorded a substantial growth in a total number of air passengers in quarter one 2018, but number of aircraft dropped to 15,866 in the same period, indicating a 30.84 percent decline from the 22,939 aircraft recorded in quarter four of 2017.

The figures, however, revealed that there was an aggregate of 37.8 percent decline from the same quarters last year.

The first quarter in 2018 continued the decreasing trend of cargo movement from previous quarters, as the total cargo movement within the quarter declined by 31.12 percent on a quarter-on-quarter basis, and by 44.47 percent compared to the same period in 2017.

In quarter two of 2018, the weight of cargo movement recovered and increased by 25.61 percent on a quarter-on-quarter basis, but still declined by 31.21 percent when compared to the same period last year.

However, unlike in aircraft movement where Abuja Airport overtook Lagos, the state remained the most active in terms of cargo movement in Nigeria.

“In the second quarter, Lagos recorded 12,931,861kg cargo traffic, followed by Port Harcourt, which recorded 10,746,587kg cargo movement in the same quarter – a significant growth from the 534,678kg recorded in the previous quarter.

“Kano rounded the top three airports for cargo movement in quarter two of 2018, with a recorded 3,532,335kg total cargo moved within the period. Notably, Enugu Airport recorded no cargo traffic in the first half of 2018,” the report said.