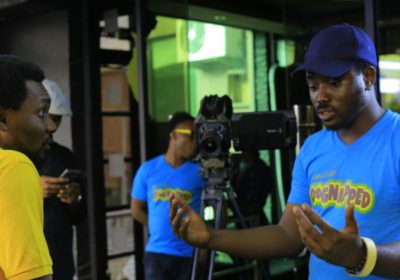 The Nollywood movie industry indeed has grown stronger and better over the years. At every movie release, there are fresh and outstanding ideas, extremely talented actors, great directors and the industry is overwhelmed by competent and polished artists. No wonder, theatre as a University course in Nigeria has suddenly taking over the educational sector.

So you all know, a new blockbuster animated movie titled Dognapped is about to hit the cinema and it would blow your mind!
Dognapped piqued my curiosity mainly because it is an animated movie. And animations are not common in the Nollywood scene for obvious reasons: Poor finance and importantly untrained professional animators. Unlike the Hollywood counterpart which has several animated movies such as Hotel Transylvania, Ratatouille etc. with dream works animations grossing the most.

However, this young movie director Kayode Bello Kasum “kaykas production“ who came into light with the Web Series Aproko 101 has taking a huge step, breaking all barriers and obviously passing one message across “nothing is unachievable!“ therefore, Dognapped as a Nollywood animation could be the beginning of a new era in the Nollywood movie industry.

Learnt about the movie shoot from a friend and I made it a duty to attend a behind the scene, and I was extremely impressed. Getting to meet the star of Dognapped, I am personally scared of dogs but I couldn’t resist his cuteness, by the way his name is Bruno voiced by the comedian Julius Agwu, you will meet him soon, well, when the movie gets released.

In this close up with Jubilian, Mr. Kayode Bello Kasum, the director of a new movie Dognapped which is soon to hit the cinemas, shares his intimate thoughts, inspiration for the movie and his expectations as the much talked about movie hits the big screen.

What was the inspiration to become a director?
When I was a kid, I use to have an imaginary friend called Bugs bunny, so me and Bugs bunny act out scenes in my head. So I started developing love for creating stories from my imaginations and creating scenes, that was where the love started.

When do ideas hit you?
I get ideas from music, when I listen to music I just get story ideas, also from life experiences. Sometimes I think hard and stories come to me from there, just like everybody that imagines. Mostly, I personally get inspirations from listening to music.

Four years after aproko 101 what was different about being a director?
Four years after Aproko 101, I am more experienced, I moved from directing my friends to directing professionals. So the way I directed them , the way I approached them and tell them to interpret the story is kind of different, unlike before during Aproko 101 we were all friends we lived together we had almost the same experiences, we also kind of think alike. So what I would do during Aproko 101 was just tell them “guy you know what we are going for, so do it like this, do it like this“ unlike now working with professionals you are meeting for the first time, you have to explain and break the story down, break the characterization to them, get to know them so you are on the same page. The difference basically is, I have gotten way more experienced than I had while I was

So the new project `Dognapped` when would it hit the cinema and when are we seeing the trailer?
The movie should hit the cinema sometime this year. But we are targeting early next year 2017 and we might just like what we see and it comes out this year. Watch out for dognapped!

What is your favorite part of making dognapped working with animators to visually convey the story or postproduction?
My favorite part of making the movie `Dognapped,` is post production. The fact that you keep seeing what you have done, keep making it better seeing the mistakes you made and trying to correct it is fun, it is a lot of work but it’s fun because you have the ability now to make the movie come to life. Imagine when you shoot a movie and you are now the one editing it, it’s an entertaining process I can’t wait to start and I can’t wait to finish it.

Nigerians are talking about this movie, surprised at the new attempt at animation. How do you feel about it?
Scared! I know Nigerians well, so before we began on the project we did a lot of research, we had test, we showed the actors the test and they believed it would work. I am a very skeptical Nigerian myself I critic peoples work, my friends work. Before we started, myself

and my producer Temilola Adebayo we tried, we are realist we tested it, the result was enough go ahead for us t go into it. I am scared and I am also optimistic because Nigerians would enjoy this it’s new and we are hoping it does really good in the cinema when it comes out.