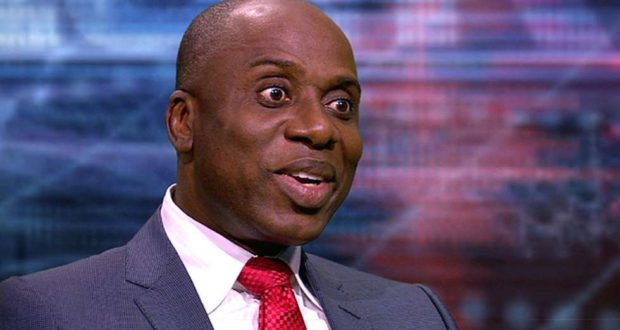 The Minister of Transportation, Rotimi Amaechi, on Sunday said that in the course of executing the Warri-Itakpe Rail line, stations were built in the villages of Peoples Democratic Party (PDP) chieftains.

Mr Amaechi disclosed this at the 'Next Level Presentation' at Presidential Villa Banquet Hall to signal the commencement of the campaign of the All Progressives Congress (APC) for the 2019 general elections.

The minister who made a presentation titled 'What We are Building ' said that President Muhammadu Buhari, upon assumption of office, directed that old and abandoned projects be completed.

"The truth is that the country is compelled to make a choice between good and bad. When I was appointed the Minister for Transportation, the president warned-do not start new contracts, go and complete old ones.

"We met Itakpe -Warri Rail line which had been in existence for 34 years uncompleted; it would have been the first Standard Guage line in Africa if it was completed.

"Based on the president's instruction, I did a memo; I thought we will borrow money from China; but the president refused. He said we should use our internal funds to execute the project.

"People saw me on social media on Train service from Warri to Itakpe. I got to Warri 8 p.m. because I was going from one station to the other--almost all the villages and most prominent members of PDP made sure that train stations were in their villages.

"So, I am compelled to do those stations in villages of members of PDP; it is okay; it is the instruction of the president that you must go and finish the old work."

He said that the tradition in the past was that once one was elected, one left the old things for the old people and awarded new contracts.

According to Mr Amaechi, the ministry will start commercial train service from Itakpe to Warri.

On PDP's argument that it started the projects, Mr Amaechi said that Buhari made it clear on commissioning the Abuja -Kaduna rail project that the project was started by the former government of President Goodluck Jonathan.

"We completed it but two things are remarkable--we borrowed 500 million dollars to start that project at the time oil was selling at 114 dollars per barrel.

"I will show that we can; when I wrote a memo to the president and to the cabinet requesting that he should allow me borrow 500 million dollars from China to buy locomotives and coaches for Lagos-Ibadan, the cabinet under the directive of the president refused.

"He (the president) said 500 million dollars; we can get from here and we are funding it from here; so we did and completed Kaduna to Abuja quickly.

"We spend N56 million per month and we get N16 million; so we are augmenting for both rich and poor--N40 million per month under the directive of the president because he fears that the poor might not be able to afford it. So, everybody is using it."

According to him, Lagos to Ibadan railway is almost complete--a distance of 156kms.

The minister said that application had also been made to construct Kano to Kaduna railway as approval for funds is being awaited.

"We are about to award the central line from Abuja to Niger to Baru from Baru to Itakpe to Warri; the president had approved a new seaport in Warri. We are negotiating with a Chinese company which will build it.

"Do not forget that N2.7 billion dollars is N1 trillion. So, we are looking for money to commence already awarded work on the coastal rail.

"Then from Port Harcourt, it goes to Aba, Uyo, and ends up in Cross River State.

"We are almost ready to award Port Harcourt to Maidugiri. The difference between us and the last award is that the last award was 1500km but under the directive of Mr President, it was extended to 2000 km.

"The last award was Port Harcourt straight to Maidugiri but in order to satisfy everybody at the directive of the President, we must get to every state capital," he said.

On his part, Mr Babatunde Fashola, the Minister of Power, Works and Housing, said that it would require a long journey into Nigeria's history to recall when last it had massive investment in infrastructure.

"It is no coincidence that we look to the 1970s and the 1980s when we built new airports, new seaports, new refineries, new highways and bridges.

"The closest you will have to that era is the 1990s when petrol-money was also being applied to upgrade infrastructure under the Petroleum Trust Fund (PTF )incidentally chaired by Buhari.

"We lost an enormous opportunity when recently oil money rose to $114 dollar per barrel and stayed there for almost a decade and we have no new airport, refinery, bridges, petrochemical plants, no new seaports to show accountability to how all the money went," he said.

The event also witnessed the unveiling of Buhari-Osinbajo 2019--A Basic Guide-The Campaign Manual in Brief. (NAN)

Three Destinations, A Lifetime Of Adventure