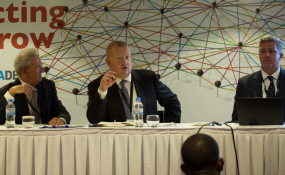 With the East African region seeking to boost revenues from the tourism industry and diversify services, the bloc has been keen on attracting international hotel brands to establish presence in the region.

However, in the process, concern is how can they attract and retain the brands.

This was also a major topic of discussion at the ongoing Africa Hotel Investment Forum underway in Kigali.

Although global brands agree that there is great potential in the East African hospitality market largely due to rapid economic growth in recent years, the firms' pace of establishing presence in the region has not been as rapid as expected.

A number of represenatives of internationally renowned hotel brands told The New Times that among the reasons for this is their business models.

Most of them are asset light and do not develop or own properties rather preferring to manage complete establishments.

At the moment, most say that few establishments across the region meet standards for easy takeover which requires them to work with developers.

Wolfgang M. Nueman, president and chief executive of The Rezidor Group, which owns Radisson Blu Group of Hotels, said, as an asset light firm, they mostly look at managing existing properties that are in shortage across the region.

Because of this, they have to work hand in hand with developers from the region to have establishments that meet international standards and requirements.

"We have had few takeovers of existing establishments in the region. Most of them have been newly built hotels that meet the sizes and scales. With that, we can guide property developers and property owners on how to go about construction," Nueman said.

Hilton Hotels and Resorts senior vice-president for Europe, Middle East and Africa Patrick Fitzgibbon echoed similar sentiments, saying with that being the preferred business models, the international brands mostly have to work with local and regional partners to construct establishments which could take time.

Fitzgibbon said that although Hilton runs over 570 hotels, only a handful are fully owned and the firm was seeking buyers for them.

"Even for the few that we fully, own, we would be happy to sell to interested parties," he said.

It is a similar story for Marriott Group of Hotels who, despite running about 5,700 properties following their acquisition of Starwood Hotels, only own a handful of them - which officials say could be sold off.

Various international hotels representatives said among their precondition when entering the sub-Saharan African market was aspects such as infrastructure (airports), business environment and economic development.

Noting that the East African market had exhibited a lot of economic potential, the executives said the efforts to develop airports and other access infrastructure would come in handy in attracting hoteliers.

"We need more of such in the region and we will do our part to serve the market," he said.

The brand plans to open a second hotel, Park Inn, in Kigali with plans to establish presence in other parts of the country.

He said, presently, the best way for countries to attract international brands was to enable such takeovers by asset light firms who would in turn raise standards in management.

A growing concern among hotel operators in the country is availability of qualified staff as well as suppliers of products and materials required to run hotels.

A 2015 study by Rwanda Development Board and the UN Economic Commission for Africa showed that local tourism industry was increasingly characterised by high levels of imports leading to high revenue leakages.

Industry players say they are navigating this by constantly training their staff abroad to give them the right experience for the job at the same time creating a pool of skills.

For the case of Marriott, Samir Baidas, chief development officer for Middle East and Africa, said they trained their staff in several countries prior to the opening to ensure that they meet standards.

The Vice Chairperson of the Chamber of Tourism at Private Sector Federation, Francine Havugimana, said, going forward, training of the hospitality sector is emerging as an investment opportunity which investors can capitalise on.

With the entrance of the multiple brands, she said that there will be huge demand for adequate training for staff