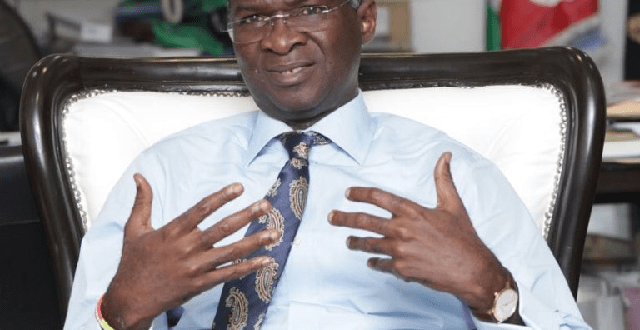 The groundbreaking ceremony to begin the reconstruction of the 32-kilometre Apapa-Oshodi-Oworonshoki-Ojota in Lagos was performed yesterday by the Minister of Power, Works and Housing, Mr. Babatunde Fashola, on behalf of President Muhammadu Buhari.

The whole length of the road will be paved with reinforced concrete by Dangote Industries Limited at a whopping cost of N73 billion, using the Road Trust Fund policy.

The fund is a form of public, private partnership, conceived to accelerate the provision of federal roads by allowing private sector operators to collectively fund road projects in exchange for tax credit.

“The Road Trust Fund policy gives private sector operators an incentive to fund infrastructure with government. This is an innovative and laudable scheme, we are putting our money upfront,” said the President of Dangote Group, Alhaji Aliko Dangote.

“We are actually advancing our tax to government upwards of almost four to six years. This is a novel idea that will, no doubt, lead to rapid economic growth through significant infrastructure improvement. We look forward to doing more of this infrastructure with government,” he added.

Dangote lauded President Muhammadu Buhari for establishing the Road Trust Fund, which he said is targeted at constructing major commercial corridors with heavy vehicular traffic, saying, “This will surely open up the economy, boost our ease of doing business and also improve our ranking considerably in the annual global competitiveness report.”

He said last year, his company’s corporate tax, withholding tax and education tax alone got to N97.6 billion and that he was sure that this year, “Our taxes will be over 160 billion, by next year it should be over N200 billion. So, it is a wise thing for us to work with the government, because those roads that are not delivered on time, can actually be delivered on time and on budget, because if there is money for it, then there will be no excuse to increase cost.”

Dangote said the project, which would be the largest concrete road in West Africa, had a two-year construction period and it would be completed on budget and ahead of schedule, adding that the road would have a minimum lifespan of 45 to 50 years.