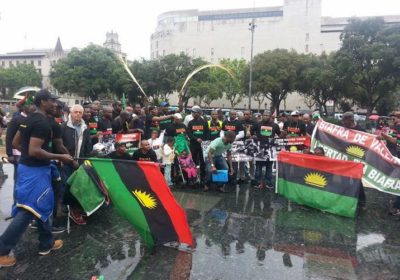 The apex Igbo socio-cultural organization, Ohaneze-Ndigbo World-wide, has advised the federal government to go into dialogue with pro-Biafra agitators, especially members of the Movement for the Actualisation of the Sovereign State of Biafra (MASSOB) and the Indigenous People of Biafra (IPOB), rather than  detaining and killing them.

This is as it called on Igbos who have their investments outside Igboland, especially in Lagos, Abuja and other parts of the country, to think of bringing such investments back home in order to create employment opportunities for the teeming angry and jobless Igbo youths.

President-general of Ohaneze-Ndigbo World-wide, Chief John NniaNwodo, who spoke yesterday, during an interactive session with newsmen in Port Harcourt, the Rivers State capital, said the agitation by MASSOB and IPOB is as a result of marginalization and therefore needs political solution and not military confrontation.

Nwodo said, “Under the constitution of Nigeria, you have freedom of expression and freedom of association. If somebody says he wants Biafra, he is free to say so as long as he is saying it in a legitimate way. ‘‘He can take his petition to the National Assembly. He can have a plebiscite, if he wins, fine, if he doesn’t win, he takes it like that.’’

How Nigeria is losing on Global relevance