For over a century, the people of Ijebu Ode have celebrated the Ojude Oba Festival. The Festival is an annual occasion where the ancestral lineage of the first converted Muslims of the Ijebu people pay homage to their King, the Awujale, for allowing their ancestors practise Islam. The Festival takes place on the third day of Eid-el-Kabir, displaying the rich cultural heritage of the Ijebu people, and attracting tourists from across the globe and Ijebu indigenes in the diaspora.

The festival opens with prayers by the Chief Imam of Ijebu Ode, for the well-being of the King and the people as well as for peace and progress of the land. This is followed by the colourful display and procession of the 36 age groups in the town. Each group has over 50 members and is known as the Regberegbe.

These Regberegbe are gorgeously dressed in their ceremonial attire, exhibiting affluence and prosperity as they pay homage to their King.

Tourists and indigenes present are thrilled with the breathtaking parade of the Baloguns and Dodondawas, who are descendants of the war heroes of Ijebuland during the precolonial era. During this spectacle, the reigning Balogun and his associates, all dressed in their regalia, engage in a mock battle as they pay homage to the King. To add more glamour to this prestigious event, Glo, the official sponsor of the festival awards the most outstanding Regberegbe group, the prize money of 1million naira and a trophy. The Awujale will also commission the Glo CSR projects, donated by the company in appreciation to the people of Ijebu Ode for their association with the brand. 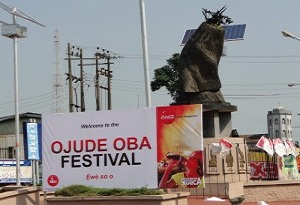