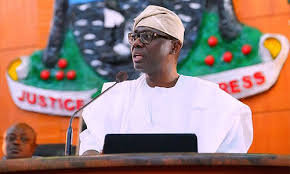 The Lagos State Government clarified yesterday that it has not taken a decision on the operation of commercial motorcycles and tricycles in the state.

Commissioner for Information and Strategy, Mr. Gbenga Omotoso, explained that the government would not be taking "definitive action" on the Okada and Keke riders without consulting the stakeholders.

Daily Trust reports that the state government had vowed to curtail the activities of operators of commercial motorcycles popularly known as Okada riders who have taken over the highways.

Governor Babajide Sanwo-Olu recently hinted that the state government had taken a final decision on the "menace" of commercial motorcycles and tricycles but this would be discussed with the security apparatuses in the state.

Twice, the Security Council met at the Government House without the definitive action reeled out. After another four-hour Security Council meeting chaired by Governor Babajide Sanwo-Olu and attended by all commanders of security agencies in the State, the commissioner said the Government's delayed action against restriction of motorcycles and tricycles was informed by the need to achieve a generally acceptable solution to the menace.

Daily Trust gathered last night that following government's move against the operation of the commercial motorcycles and tricycles, various unions stood up to confer with the government which informed the government's decision to hold on.

The Security Council, the Commissioner said, is currently considering the suggestions and recommendations submitted to the Government before coming up with definite plans on the Okada issue.

He said the ongoing enforcement of the extant Traffic Laws and Okada restriction will go on, pending the final decisions of the Security Council.

Japan and Singapore top 2019 list of world's most powerful passports