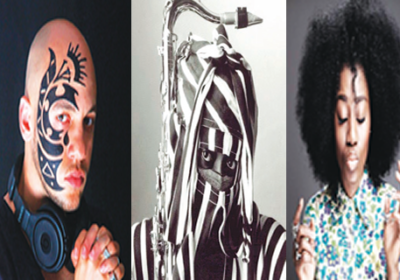 Due to the staggering level of competition, entertainers all over the world are known to attempt carving clear-cut identities to distinguish them in the crowded scene. Those in Nigeria are not different, and here, Adeday Odulaja and Ogechi Ndubunma, present 20 Nigerian celebs with unique features.

DJ Sosse
It’s not every day one comes across a man with a huge tattoo on his face. DJ Sosse has really made a name for himself with his tattoo, which he claims to be his brand. The Disc Jockey, whose real name is Thomas Amar-Aigbe, born to a Hungarian mother and Nigerian father, lived for 12 years in the United Kingdom. Mainly known as “tattoo face,” he is regarded as one of Nigeria’s best DJs and it would surprise many to know his first degree is in Business Information Systems and Film and Video Production.

D’banj
Also also known as Kokomaster, D’banj has a thing for sun glasses and hardly makes an appearance without one. His glasses come in different shapes and sizes and they’ve looked better as his fame and fortune increased. One can’t be all that wrong to say the sun glasses have become a part of him and some even say he looks somewhat older without the glasses so they do give him an edge.

Don Jazzy
The Marvin boss has shown his love for walking sticks since the early days of Mo’Hits Records. It is considered an integral part of his fashion statement because apparently, he has no known walking defect. Even though he does not carry them as often as he used to, especially when he was still very much with former partner, D’Banj, but we still see him with them many times.

Daddy Showkey
This veteran Nigerian music act has stuck with one unique style for as long as we can remember. He has huge dreadlocks on his head which look very heavy but accentuates his Ghetto soldier look. Without a doubt, Showkey won’t be Showkey without the locks as we all have never known him without the locks popularly referred to as “Dada” on the streets. Showkey once claimed to have made a vow with God that if he becomes successful he would not cut his dreads. If that’s true, then we guess he is never going to take them off.
Lagbaja
Lagbaja is a Nigerian musician and even on the world stage, he is in a class of its own when it comes to identities. Known for his masks draped in different colourful patterns, he has never been seen without it, at least in public and apart from hanging around those who don’t know him. Beyond the mask, which he says is a depiction of the identity of every faceless or unknown member of the society, Lagbaja’s music is very unique and cannot be mistaken for anyone else’s.

Flavour
Like others, the ladies’ man has his own thing going on with dreadlocks different from the Daddy Showkey brand. Since he broke into the music industry, he has not been seen without his equally long locks which have evolved with different patterns, making him more stylish overall.

Not many Nigerian actors would make this list but he is here due to his penchant for high-sounding catch phrases which he never seems to run out of. Hardly does he appear in a movie without at least one of his catch phrases running through emphatically. Some of these catch phrases: “Etelu ugba etelu ose,” “Ekwe mgbaduga,” “Otanjele mgboshe,” “wanboto,” “ekwensu eweta phone number.”

Terry G
For so long now, Fagba, Lagos-bred Terry G has spotted the short dreadlocks which some call silly. Although, in truth, the dreadlocks do not make him look exactly sane, it gave him his own brand and uniqueness, that was before he cut them off though.

DJ Spinall
Like DJ Sosse, Spinall is also a Nigerian DJ but one who boasts a unique style. There is a reason he is called The Cap and that is not unconnected to the traditional African cap he imposes on whatever outfit he is putting on. He has made this cap a major trend among young socialites in Nigeria and beyond.

Falz the Bahd guy
This Nigerian artiste, presenter and actor has overtime chosen styles that work well for him just like his “razz” accent. A combination of hat that he’s almost never seen without, along with the glasses without lens. He has made this style popular among young Nigerians, many of who are among his teeming fans. Falz, who has risen very fast in such a short time, is set to go for far much longer. So meteoric has his rise been that one is left wondering why he read law in the first place. Well, it becomes a bit understandable upon learning his father is a Senior Advocate of Nigeria (SAN).

Yemi Alade
Widely known as Mama Africa, Yemi Alade is as popular for her African styles as she is with her hit singles. She knows how to make the beautiful African styles work for her and even if she sometimes embraces foreign hair styles, she never leaves them on for too long. Her African hairstyles, however, have a common characteristic which is that they are always bulky and wonderfully woven.

Tonto Dikeh
Tonto, who has been active for about decade, does not have a tattoo on her face but she has tattoos on parts of her body. She claims her tattoos are her secret but adds that she cherishes them a lot. So say what you may, it would not change the way Tonto feels about her tattoos which she claims are up to 10.

Tiwa Savage
The Marvin queen loves her nose ring and is almost never seen without it. Some people are of the opinion that the ring makes her look more beautiful but we think with or without the ring, she is beautiful. So let’s say it’s her brand and personal style.

2Baba
Although the bald head he displays around town is more down to the forces of aging than choice, it has really become his brand and personal style. But we believe it has inspired others into going bald as it works perfectly for him.

Banky W
Like 2baba, Banky is bald but makes it look fly as he wears hats to hide it. We do not have a problem with the hats as they look really stylish on the Empire Mates Entertainment boss who has been around now.

Eva Alordiah
Since breaking into the industry some years ago, Eva has always been on low cut but with varying styles to go with it. The Delta-born rapper and songwriter, who is finally ready to drop her debut album titled 1960 despite hitting fame since around 5 years ago, is a fashion forward individual and is never afraid to show it.

2Shotz
Call him a leader of the bearded gang in Nigerian music and you won’t be wrong, 2Shotz has maintained his heavy moustache. It would be interesting to see what the rapper, who used to be a part of the larger collective known as Da Trybe and headed by Eldee, would like bare-faced.

Gbenga Adeyinka
It might not be all that desirable but it is no doubt an identity. The notable comedian from Ogun State is known for his tummy and as big as it is, he seems to have always had it. What’s more intriguing is that he also manages to look stylish despite the bulging belly.

Chidinma
Petite vocal powerhouse, Chidinma Ekile has shown that women can overlook all the fuss about Brazilian, Carribean, Peruvian hair and still look smashing. The Project Fame winner, who has been strongly linked to Flavour and VJ Adams but has denied having anything to do with either, has made the low cut her identity and she is still slaying.

For the prodigiously talented TY Bello, who easily cuts across the lanes of music, photography and even video directing, there has always been a distinct look. Apart from her days as a member of Kush along with Emem, Lara George and Dayo Torimiro, she has always been one to spot a large Afro hair that is resplendent in its thick black colour. Even as a mother and musician leaning towards inspiring and empowering others, her large Afro hair is still her dominant identity but unlike her early days, there is no longer a debate about whether it is her natural hair.

Benin is the Home of Art and Culture – Oba’s Brother